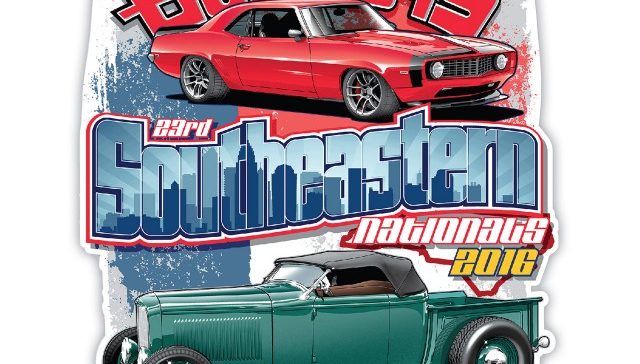 Goodguys 23rd Pennzoil Southeastern Nationals preparation started on Saturday for my wife and myself. We took the girls to grandparents so we could have a date day. We had big plans for Sunday. We were going to cruise down to Goodguys bright and early Sunday morning. We were on the road before daybreak. We met one of our friends on the way so we could cruise together. It was just like old times when he and I would cruise to shows.

We arrived at Lowes Motor Speedway at 7:15 am. We had plenty of time to sign up to race, find a grid spot, walk the course, and prep the car. While signing up my other buddy and girlfriend arrived. We both signed up to run the autocross. He brought his Focus ST and I ran my 01 Camaro. We cruised in the track after signing up and found our grid spot. We then unloaded the car’s, mounted camera, and set tire pressure. Next, we walked the course trying to find the best attack line. After the course walk, next up was the driver meeting. Now we were ready to take aim at the course.

I made my first pass. I was able to give a ride to a spectator. Below is the video

It was her first time on an autocross track. She had a blast. After my first pass, I was in the top ten. My buddy then made his first run, and he managed to get in the top ten also. We were waiting our turn again to make our second pass. I was up first. I was able to get my wife in the car for this run. You can see the video here

She is going to kill me after she finds out I posted the video. After this run, I managed to jump to third place. Next up was my buddy. He shot out the gate made the first turn headed to down the back stretch. He then jumps on the breaks to make the left-hander. He came in a little too hot. The front outside tire locked up. There went the ability to steer, and in the wall, he went. It was a pretty hard hit. He was towed off track. The rest of the day was spent finding a truck and trailer to get his car home. I told him the one time I drive my car to the track and leave the truck and trailer home we need it. Guess that is how it goes. It was still a fun day, and one we will never forget. We were able to borrow a truck and trailer from a local friend. We loaded up the car. Once the car was loaded, we headed out to get the car home. It was a feat in itself. We got the car home/unloaded and by this time it was 5 pm. We all jumped in my car and headed to Buffalo Wild Wing for a bite to eat before my wife, and I made the one-and-a-half-hour ride home.

All in all, it was a good day. Even though I was only able to make two runs, I still manage to squeak out an eighth-place finish. Not too bad considering I stop running at 10 and they keep running till 1.

Hope you enjoy the video. Hope to see you at a future event.

What to read next

Thank you for subscribing.

we respect your privacy and take protecting it seriously